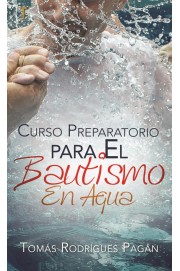 ISBN
1-58802-015-0
Autor
Tomás Rodríguez Pagán
Tamańo
80 pp.
Encuadernacion
Paperback
Fecha de Publicación
2000
Título Original
Curso Preparatorio para el Bautismo en Aguas
Idioma
Spanish
Datos del Autor
The Rv. Tomás Rodríguez had born in 1942 in Orocovis, a small town in Puerto Rico. He got graduated from the Superior School of his born town in 1967. He moved to the United State and studied in the Spanish American Bible Institute de New York studying three years of theological studies, getting ready for the ministry. He graduated with very good grades in the 1964 and in the same year he was recruited for the same institution as a teacher. He got his first credential as a ministry of the Assemblies of God in the 1965. He was ordained for the full ministry in the 1978. In the 1975 he got to the community of Levittown in Puerto Rico, to be in front of a small church that meet in a residential house. God has blessed him and have give him one of the most beautiful church in Puerto Rico. He has been pastor for 23 years. The Reverent Tomás Rodríquez has a Bachelor in Arts from the Interamerican University of Puerto Rico, with a Summa Cum Laude grade. He has served as a teacher of the Public Education System of the State and for a short period as a School Director. He has also served as a Sectional Presbyter, Executive Director of Mission and actually has seven year as a Superintendent Assistant of the General Presbyter of the Assemblies of God in Puerto Rico. He is married with Aida and is father of three children and grandfather of eight grandchildren